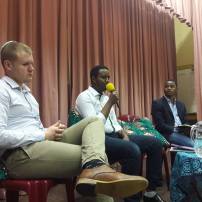 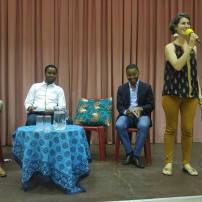 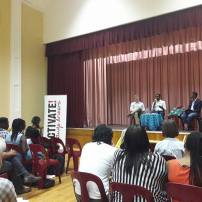 This month’s session will see prominent business people from the Somali Association, Jewish and Muslim communities among others, sharing best practice on entrepreneurship. How do you use your cultural capital to build your business whilst building your community?

Join us if you are a curious local entrepreneur!

“Collaborative Entrepreneurship” from a multi-cultural perspective.

Siyabulela Sophi is a visionary that overcame many obstacles to start a business that is a catalyst for change. Award winning Social Entrepreneur, originally from the Eastern Cape, Mr Sophi founded Makhaza Lifestyle Pty Ltd in 2013, a social enterprise specializing in project Mmnagement and clothing Mmnufacturing.

Sophi is one of the pioneers who founded the 1st Friday Conversations in Khayelitsha which aims to engage youth on a monthly basis on topics of interest to inspire, empower and encourage, among other things, youth entrepreneurship.

Mr Roberts is the co-founder of Eden, a startup NGO which aims to increase young South African Entrepreneurs’ access to establish business networks by leveraging the Jewish Business community from within. He is past deputy Chairperson of the South African Union of Jewish Students UCT and has just retired from a long career in Habonim Dror, a progressive Jewish Youth Movement. He is passionate about finding new and inclusive avenues towards economic growth.

Mr Mohamed, was born in Somalia, in a small town called Kismayo (a port city) and came to South Africa in 2002. He started operating small businesses in different townships across four provinces of South Africa. He joined the Somali Association of South Africa (SASA) in 2011 and held different positions, eventually becoming the Director of Western Cape. Most recently (2016), he was awarded a national award from the Department of Home Affairs in the field of Civil Society/NGO category called the “Mkhaya Migrants Award” which recognises outstanding achievements of foreigners toward the development of South Africa.

Somali Association of South Africa (SASA) and it is mission and vision are as follows:

Mission: promote the ethos of self-reliance and local integration.
Vision: Build unity among locals and refugees based on peace and tolerance.

Thank you to those who came to support our first Mowbray Town Hall Talk series “Collaborative Entrepreneurship”. Insights garnered from the Somali and Jewish communities were invaluable and inspired some to start thinking about their own self reliance and resilience. Thank you to all our local and international supporters.

Mission-based consultants for the African Creative and Cultural Industries